The weekend with birds ...

We made this trip to Salim Ali Bird sanctuary in Thattekad during the weekend of 11th and 12th of March this year. Although if the plan would have fallen in place earlier, there was a brighter chance to see the migratory species that travel across the country from the Himalayas or from other countries ! Nevertheless, we decided to regale ourselves with the vast plethora of endemic and other birds on platter . 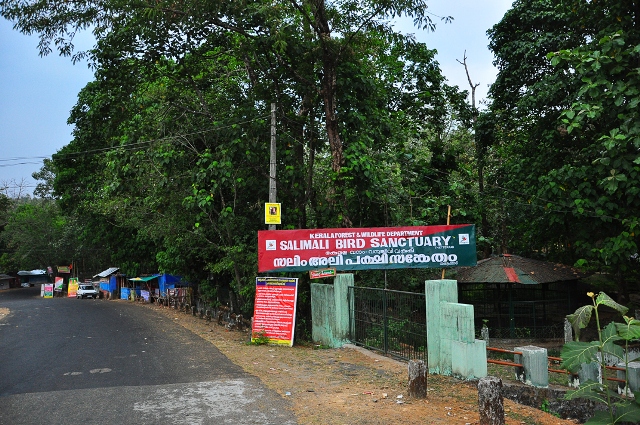 The arrangements were co-ordinated by Azeez, an active member of the India Nature Watch (INW) and myself, a co-member of INW (Thats how me and Azeez met) . Me and Satyaki, a friend of mine with his newfound interest in birding , met up with Azeez and his companions , Azmat  and  Ramnathan, in Kothamangalam . From there we moved on to Thattekad  where we put up in a home-stay near the sanctuary  gates and Periyar river. The home-stay belonged to our guide ,   Mr. Gireesh Chandran,   who is proclaimed to be , and as proven later,  one of the stalwarts among birdwatchers in the area and in general as well.

The sanctuary gates were closed till 27th March due to some local political problems compounded with recent sightings of elephants in the area. However, as it turned out, the birds know no boundaries and gates , and there were plenty of the wilderness left for us to explore.

We arrived at the homestay around 6:30 in the morning when unfortunately ,Gireesh was out on a separate commitment. Since we were too excited to rest ourselves among the incessant bird-calls , Sudha, Gireesh's mother volunteered to take us out on the morning trip.   As we soon found out, Sudha is as passionate a birder as his son, Gireesh. Together
they are quite a force that wont allow any bird escape unsighted :)

A quick refreshment and a warm glass of milk helped us to rejuvenate after the tiring
bus journey last night.. With our gears ready;  the binoculars and my  Nikon D90  armed  with  a  modest 70-300 mm lens...  our journey had begun !
Sudha stationed ourselves in an area close to the homestay . We feasted our eyes and finer senses with flights and perchings of racquet tailed drongo, Indian cuckoo, and the Malabar grey hornbill which seemed plentiful !.. 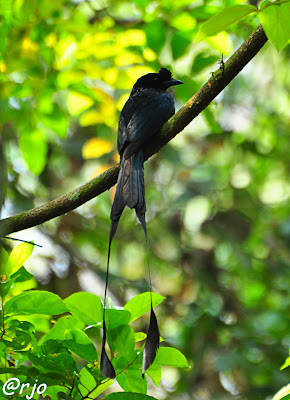 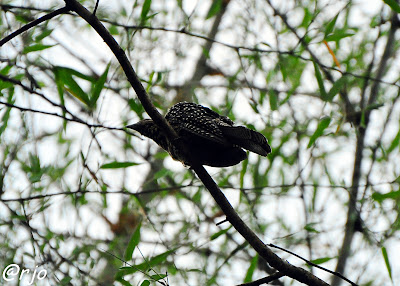 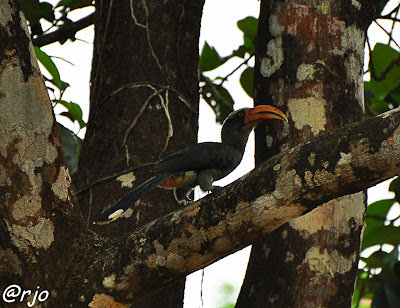 As we were busy tackling the thorny bushes and shrubs , Satyaki spotted a beauty perched in a distance. The blue dot, as we could see , was the Small Blue Kingfisher. Luckily with my camouflaged outfit I could crawl close enough to get a nice shot ! 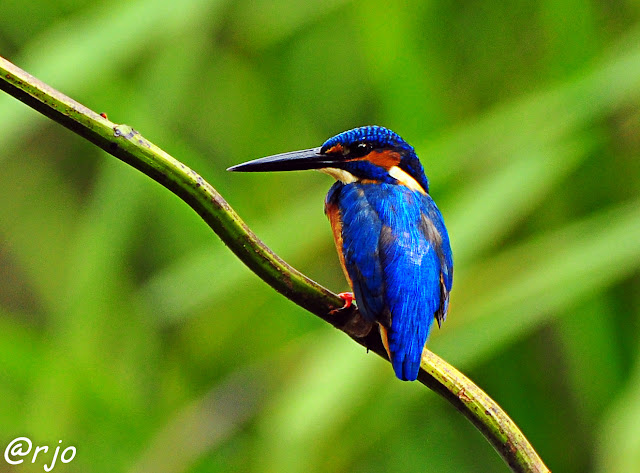 On our return, we spotted some cormorants, darters and snake bird in the river blissfully enjoying the sunshine with their trademark ‘open-wing’ style after a gloomy start to the day . 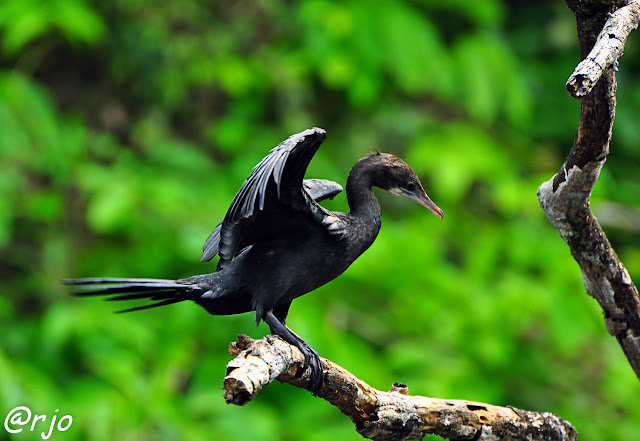 By 10 we returned to the comfort of our abode and enjoyed a nice breakfast. Gireesh had come back in the meantime and updated us on the extravaganza we would see in the coming hours with kid-like excitement . The vibrance and passion with which he spoke would leave no one in doubt about the precedence bird-watching has over his other profession, practicing law. He guaranteed sightings of Ceylon Frogmouth and Malabar Trogan, birds which had caught our imaginations since the plan for the trip was nascent.

Soon, we were charged up enough to embark on our second trip for the day. Gireesh took us on a bus to Urulanthanni Reserved Forest, some 5 KM from the homestay to a spot where he said, a frogmouth pair, male and female, had been under his observation for the past 3 days. Indeed, there was the couple, perched amidst the canopy of dense trees , sleeping ,unperturbed and oblivious of the activities elsewhere, merely a few meters from us. Their pose came right out of what we have seen only in internet and television, What a sight !! 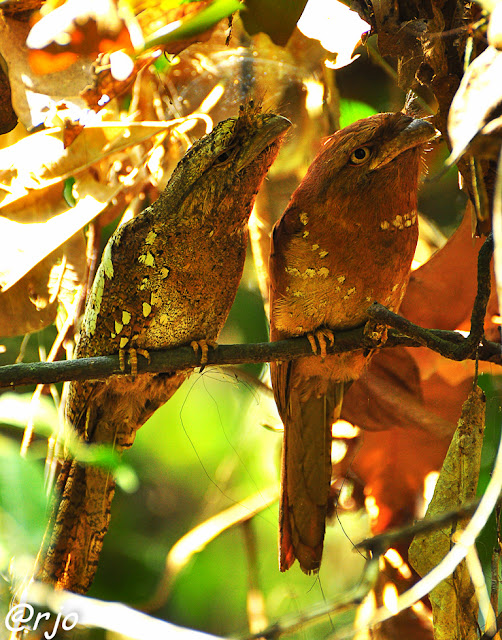 After a few shots we spent few minutes from a distance soaking in the moment and witnessing with our eyes , the unparallel beauty and uniqueness mother nature has to offer! No doubt, our trip was going to be special with such a start. Gireesh was ecstatic as ever although he has been witness to this for several years now. Kudos to him for finding the birds which would have been otherwise well-nigh impossible for us.

We continued our stroll through the jungle with sightings of different rare and endemic birds and the occasional glimpses of the ever busy Malabar giant squirrel.. Then fate smiled on us as Gireesh turned our attention to a call he knew all too well, the Malabar Trogan!!  As he himself said, they are very rare to be spotted during daytime. The bouquet of colors, red, yellow and black , the male one appeared out of the jungle with a female following close-by. Again, it was time for our visions to be intoxicated with the majesty and beauty. Here is what I am blabbering about :). 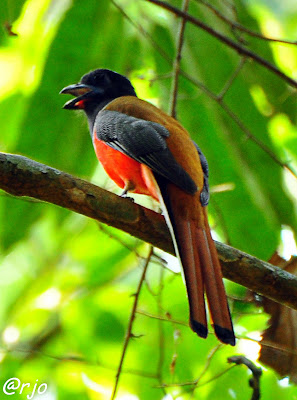 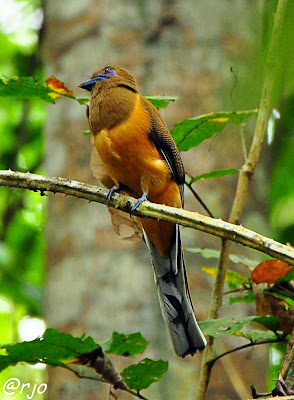 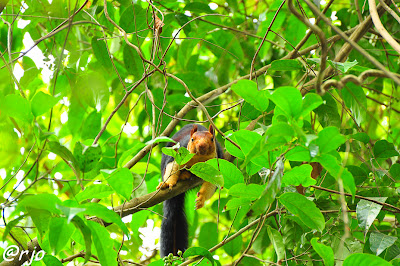 We turned back home, failing to keep our eyes from the skies and trees, following every sound :).  The weather, though a bit on the humid side, was enjoyable too and we didn't feel too tired.
Time for a homely lunch. Gireesh's family was really very cordial enjoying our tales .

Gireesh suggested an evening trip as well with promises of the nocturnal varieties, nightjars, owls and frogmouths. There was a tree he knew where two Brown fish owls would perch every evening at sharp 6.55 PM, for 2 minutes exactly before flying away . Amazing, isn't it! It isn't clear whether it was the succulent ambiance or the usual lethargy after lunch, but we started a bit late and by the time we reached there at dot 6.57 , we saw them flying away right above our head, denying a proper chance to witness the couple. Equipped with powerful torches, we carried on expecting benevolence from the other nocturnals, with the setting sun magnifying the ethereal realm of the sanctuary.As the darkness spread , throwing torch lights on trees relying on our hearing was the only alternative . Such was the 'mojo' , if I may say, a frogmouth and a Collared scops Owl granted us the wish . It couldn't get better with the serenity of the dark surroundings reverberating with various calls from creatures of the night. 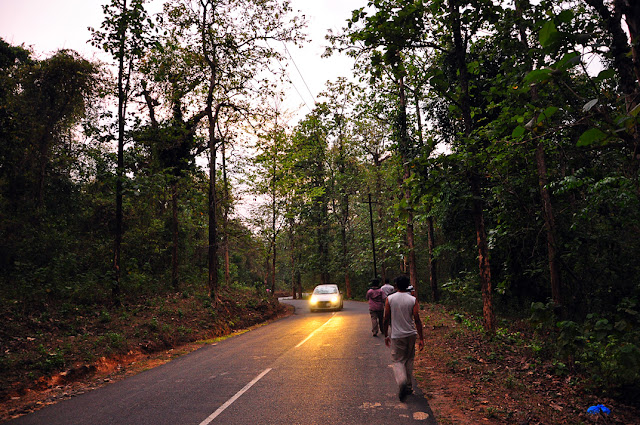 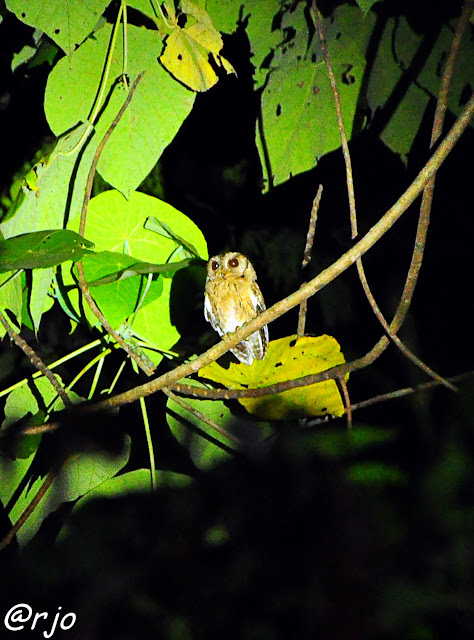 Our minds filled to the brim with the experience, we turned back home around 8:30 in the evening . The Periyar river was basking under the glorious radiance of the full moon.  After a quick recap among ourselves with the day's bounty, we had dinner and then headed to sleep . The early morning trip next day was supposed to be the culmination of our quest.

6:10 in the morning and we were ready to move out on our final trip for the tour. Gireesh, again took us around 6 KM from the place by bus in the middle of nowhere, supposedly known as pindimana, and led us into the famous forest trail which leads to a small hilltop . After crossing a stretch of rubber plantations, we entered an area where the jungle was the most beautiful of what we have seen so far. Then started the parade. The illusive and lively Dark fronted babbler was enjoying it's morning bath in a small pool of water in front of us, when suddenly a white ribbon went by in front of our eyes !! Before we could guess what we saw, there it was right in front of us ! the magnificent Asian Paradise flycatcher ! and before we could get any closer, Lo ! it vanished in thin air ! .. 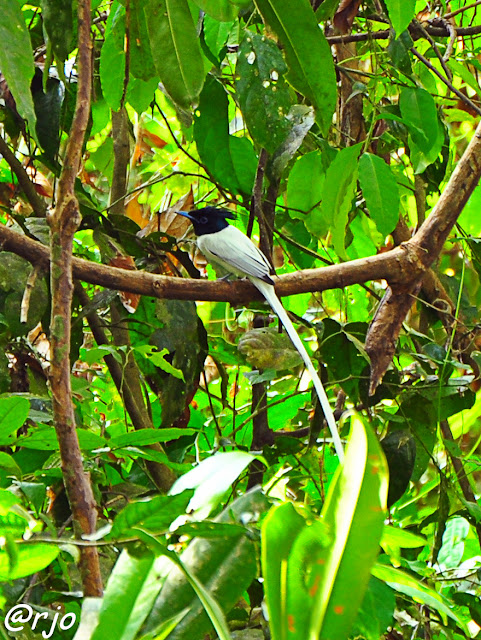 Our journey continued, amidst numerous sightings of various barbets, bulbuls and never-ending chattering of babblers.

The after tackling our way through a path full of boulders and dense undergrowth, we came to the rocky clearing which was Gireesh's one of the favorite spots for bird-watching given the large number of branches around, suitable for perching.

The visibility was around 10-12 Kms with a bright, blue firmament . ( >>> ) The dollar bird cut a lonely but solemn figure atop a high tree far away. The Flameback woodpeckers, vernel hanging parrots, orioles... you would just stop counting. Azeez was , in the meantime, busy adding species to his list in his notebook which must have crossed 200 by now. Gireesh kept relating the calls with the birds pointing us in the right directions.  Turn December, and that place would be swarming with black bazas and other birds that we were craning to see, he said. A plan in the offing, eh!. 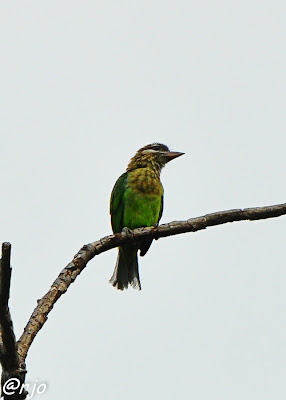 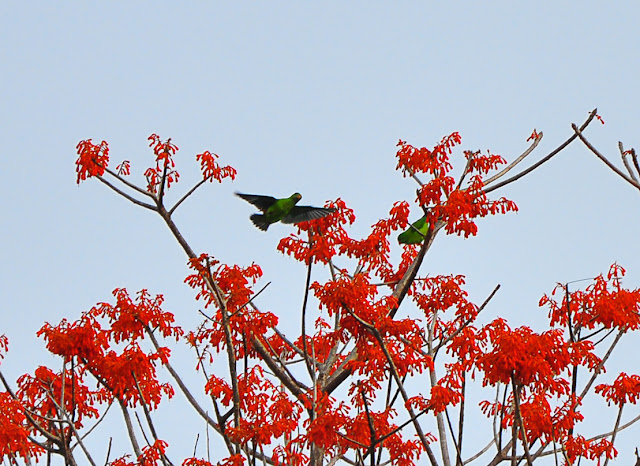 It was time for nature to compensate us again for the mistiming of our trip. A male white bellied woodpecker this time. :) , merrily pecking away at a high trunk . A juvenile joined shortly as we witnessed the father sharing with the child his spoils from the tree. 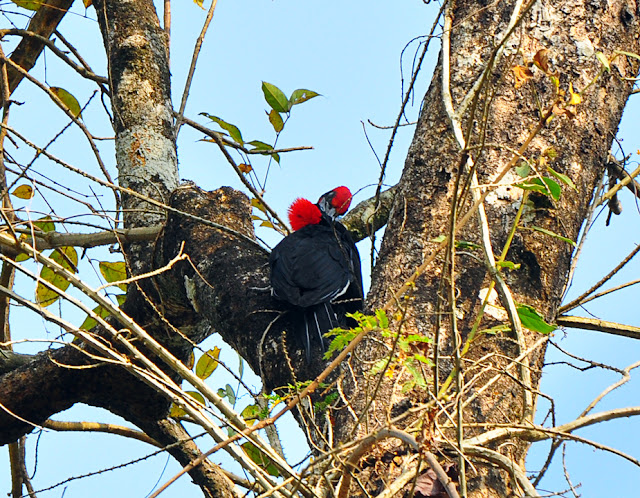 We watched them in action for about a quarter of an hour , enthralled I started capturing the memory in my lenses .. 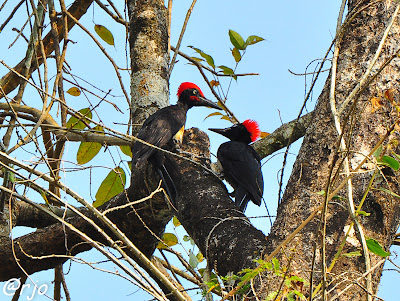 Along with our friends in feathers, we caught glimpses of the Giant malabar squirrel again in full flow of its exuberance dancing from branch to branch. On our way back, we found a Raptor resting among the shades in a tree branch but ever-carefully monitoring the fields for possible preys. 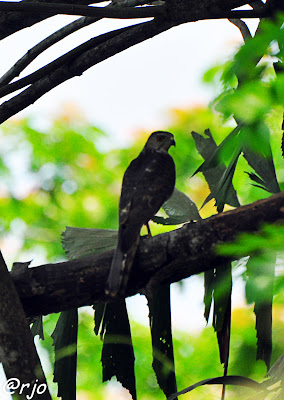 We decided to rest a while after coming back and having our lunch. The return bus from Aluva was at 8:30 and thus we had to leave the place by 6. A quick swim in the river, a relaxing bamboo-raft ride with the river turns circling the skies were pretty much what summed up our short stay there.

As we finally bid adieu to this wonderful haven for birds, the images and sounds still vivid in our sentient selves ,lamenting the birds left unseen ,  a return trip around December-January was already coming up fast in our bucket list. Really, wildlife never ceases to surprise and excite you and uplift your state of mind. 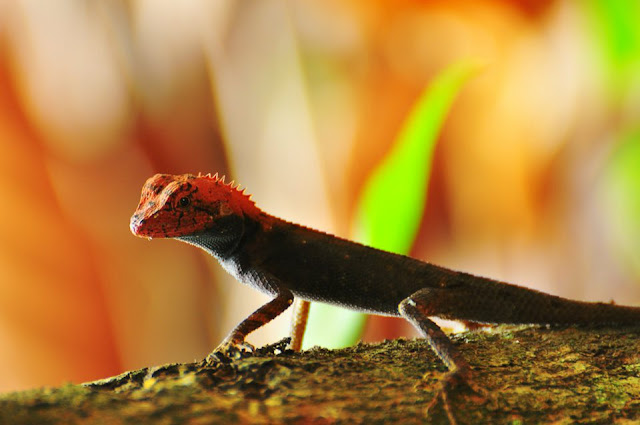 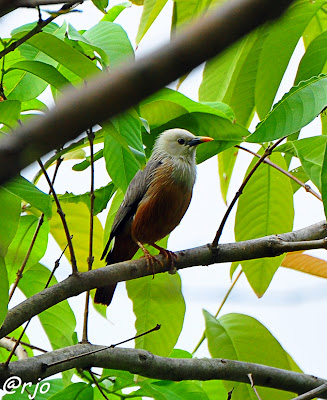 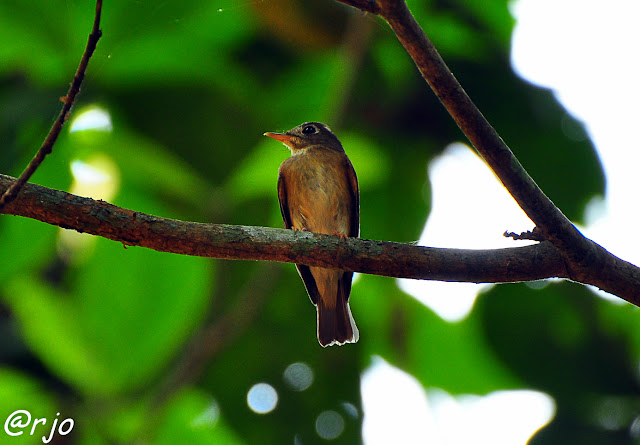 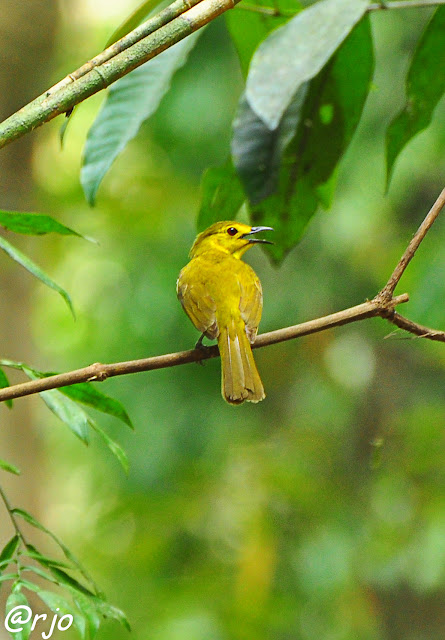 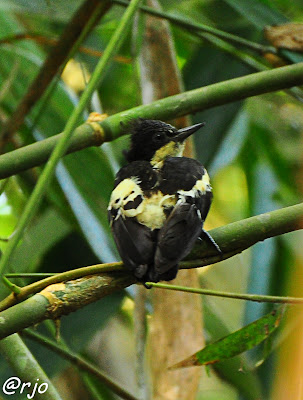 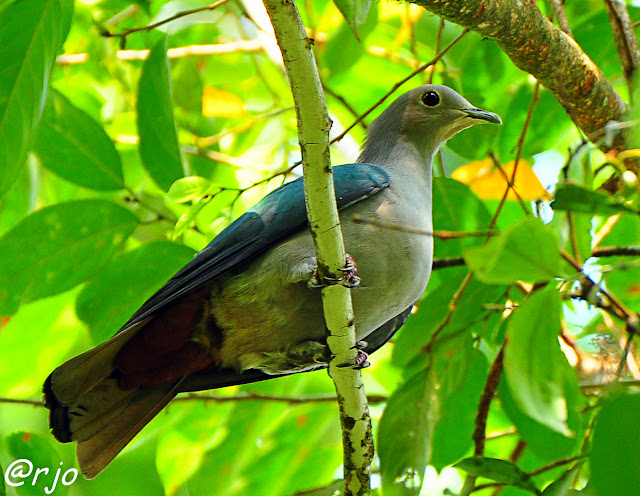 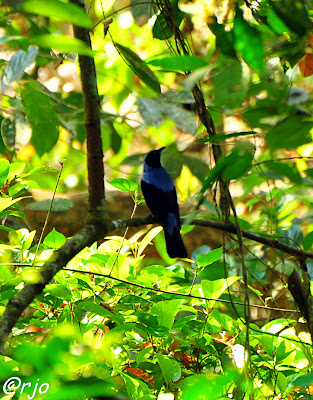 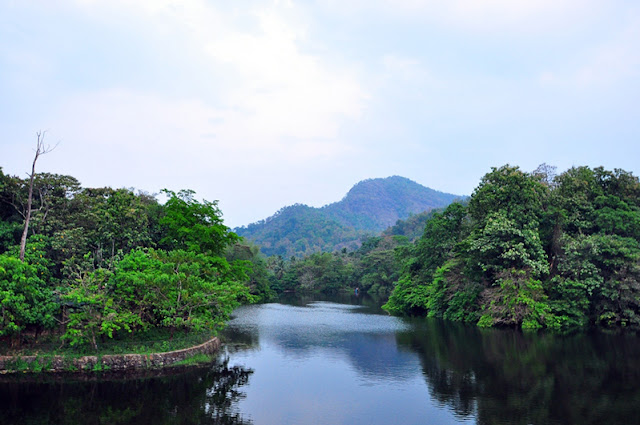 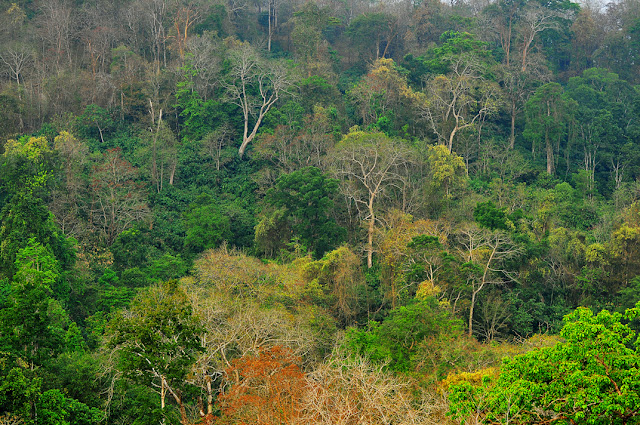 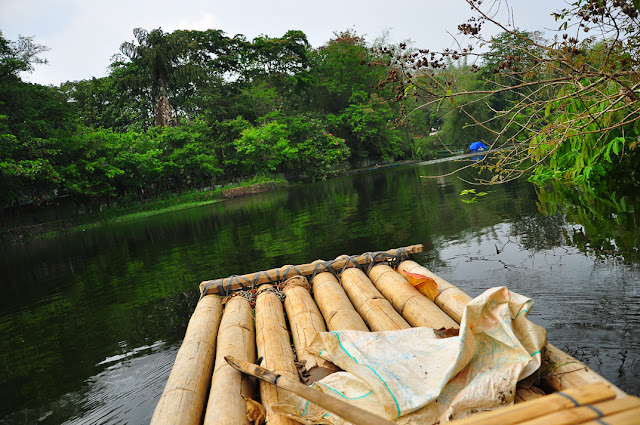